Liverpool will wake up, it's a Brendan thing

Brendan, you need to start faster!

After 11 games, there are choppy waters surrounding Capt. Rodgers' Liverpool ship.  After a modest return of 4 wins, there are a litany of reasons to describe the 'why' of what's been happening.  There's been a raft of new signings that have collectively failed to be better than Luis Suarez was on his own, not least the poster boy of wild shooting, Mario Balotelli, who appears mildly willing but functionally broken and Dejan Lovren, who may have reverted to the player he was prior to joining Southampton notably quickly.  The system has been tinkered with continually and having lost 'El Chompo', the ever-hungry Uruguayan, their other World Class Striker, and for sure he is, has spent most of the season injured & in the stands.

Combining all this with a dismal Champions League return has created a groundswell of opinion that maybe, mere months after the failed assault on the Premiership summit, Brendan Rodgers might not be the man to lead Liverpool forward long term.  In this article I will attempt to examine some of the statistical nuances of Rodgers' management tenure & see if there is justifiable hope that things will improve. Surely they must, right?  We shall see.

Brendan Rodgers has spent 4 full seasons in club management at two clubs, Swansea & Liverpool.  Prior to this he had short managements spells at Reading & Watford having cut his teeth as part of Chelsea's backroom staff during the early years of the Abramovich era. For the purpose of this article I'm going to look only at the full seasons he has managed to gauge if there are any discernible trends in his history; crumbs of comfort, if you like, that Liverpool fans can carry forward as the season continues.

Of the four seasons, three can unequivocally be classed as successful:
One cannot:
Here are the result & goal breakdowns:

...and some per game numbers:

Rodgers' systems do not preclude goals against

The only outlier with regard to goals against is his season in the Championship.  A strong showing at home leads to the only season in which he averaged under a goal a game conceded.  Beyond this, there is clear consistency throughout, with intriguingly, 2012/13, the one bad season, noticably better:
Over this period, an average Premier League side conceded 53 goals a season & both the Swansea season & the 2013/14 Liverpool season are very close to this total, so, is it fair to conclude that Rodgers' teams generally run an 'average' defence?  Recent evidence suggests this to be true, it's been a common complaint even since the title challenge & with goals drying up this year, is ever more noticeable.  His first season in a big job, he managed to comparatively minimise goal concession but failed to hit targets.  Did he then attempt to refocus on attack?

Quite obviously, Liverpool have had a slow start this year but is this a common occurrence for a Rodgers side?

Let's look at each season.

Here is the progress of total shot ratios for Rodgers' seasons: 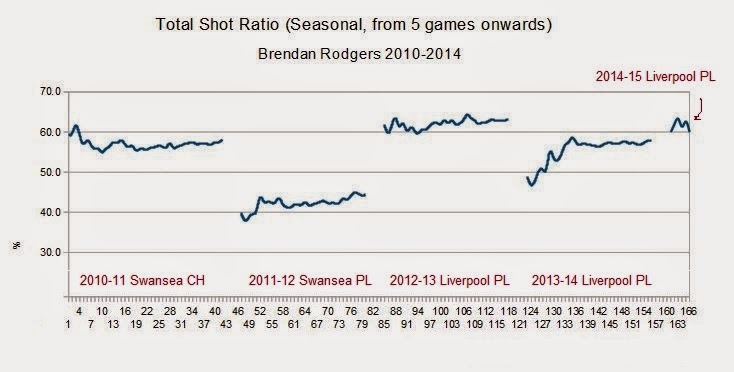 In each of the Premier League seasons the early shot ratios are less than the final totals, most starkly in 2013-14.  Fundamentally, this means that as each of these seasons progress, Rodgers' teams take a greater proportion of the shots in a game.

We can see this if we pull out the shot numbers at various given points during a season: 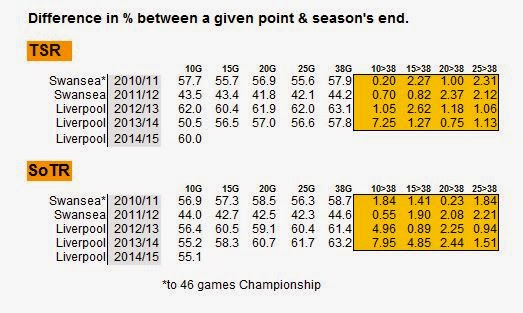 The tangerine boxes show the difference between Total Shot Ratio & Shot on Target Ratio at various points (after 10, 15, 20 & 25 games) and the final season ratios.  In every example, the ratio at the end of the season is higher than at the points preceding it.

His teams consistently exert a greater degree of shot dominance over time.

Ironically, given the perceived lack of success this year & in 2012-13, both seasons have had extremely healthy shot ratios.  In this next chart we can see how they didn't translate into goals, wins & thus points & how the converse was true in 2013-14... 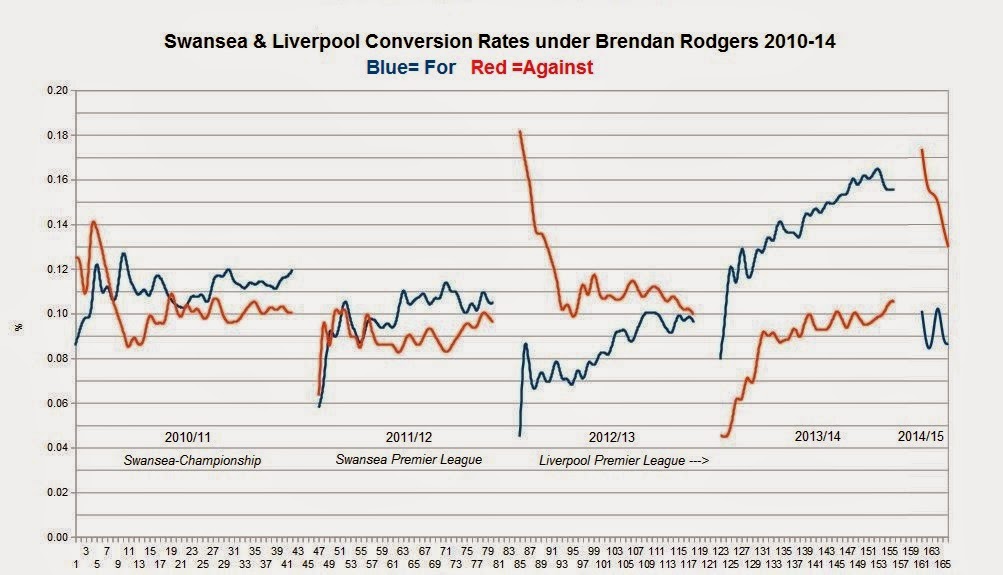 It's widely accepted that generally, conversion rates fluctuate heavily & are not repeatable one season to the next & indeed this chart does show that.  What it otherwise shows is revealing:
A season of two halves:

In every season, Rodgers' teams have gained more points in the second half of the season.

Q. Will results improve for Liverpool this year?

Whilst what Liverpool have produced on the pitch has been underwhelming so far, it is almost certain that their results will improve over the course of the season.  It's probably too late to consider aiming for the highest places in the league, and last season's 13 match win streak is unlikely to be repeated by any team soon, so what remains is the task of turning a poor start into a top 4 spot & endeavouring not to replicate the disappointing season of 2012-13.

Short term gains would be more likely given the return of Sturridge, but it needs to be noted that Liverpool's fixtures are notably easier between now & the New Year than they have been until now.  Half their matches are against teams likely to be threatened by relegation & their underlying shot numbers imply that they should be able to improve results.  Both the home loss against Villa & draw versus Hull were not representative of the shape of the game & it is unlikely that their conversion rate is going to continue to beat them down in similar matches.

A. Liverpool will improve

Whether the money spent in the summer was wisely invested remains a moot point.  I suggested at the time that it appeared to me that they had spent a lot of money on players to flesh out the squad but not necessarily improve the first team & none of the new signings have particularly shone thus far.  As I alluded to earlier, defense remains an issue for Rodgers; in fact it's been an issue tossed about repeatedly throughout the league, the modern game appearing to isolate centre backs & invite pressure & ultimately mistakes.  The role of Gerrard has been extensively scrutinised in relation to this problem but maybe it's just a Rodgers hallmark to get used to? He has never had a defensively solid team; he may have studied under Mourinho but he has his own ideas about how to get a team to succeed & it's clear that it predominantly relies on his attack functioning.

Markovic, Can & Moreno all look promising signings for the long-term and it is well known that Liverpool use modern analytics in their recruitment process, so: there is common sense behind these purchases, although they will need time.  It won't always work out as we've seen with Tottenham who's similar recruitment drive looked equally good on paper but has thus far not yielded dividends.  Balotelli was a gamble that may eventually pay off, I still feel Rodgers decided to sign him to mitigate against the loss of Suarez' shot volume & a potential partnership with Sturridge could well prosper; in the best performance of the season against Tottenham, they looked dangerous.

There is an issue surrounding Sterling & Coutinho, who it appears both find a left forward role to their liking, so much so that Rodgers' appears reluctant to start them both & when he did against Newcastle, he relegated Sterling to an ineffective wide right position.  I feel Lallana is a bits and pieces players, unable to strongly influence a game but some grace should be given at such an early juncture and Rickie Lambert must wonder how he can get on the pitch.  On signing, Rodgers suggested he would work well with Sturridge, then promptly bought Balotelli & promoted him ahead.

Were I a fan, my chief concern would be that last year appears to have been a perfect storm & is a clear outlier when set against the rest of Rodgers' promising but trophy free career.  Currently his CV includes Manager of the Month awards & a promotion.  In a volatile business, he has earned the right to work through this season but Fenway Sports Group will be highly conscious that although last season's heights are unlikely to be matched, a degree of consolidation is a necessary target.  Aspirations will include regular Champions League qualification & given high investment, that will likely remain a minimum benchmark.  Long term, Rodgers' needs to balance his teams' performance over a season.  He appears very effective at getting his team to perform strongly as the season progresses but is continually hampered by slow starts.

What I think i've shown here is that Liverpool are currently at a low point that is unlikely to continue. Some of their underlying numbers (4th shots, 4th shots against, 6th Shots on Target, 5th pass%, 2nd pass%against) indicate that long term, they are a team that are likely be challenging for the top 4 places but with Man City & Chelsea total locks & Southampton showing few signs of let-up, it is going to be a mighty squeeze for the last remaining spot.  Even an implosion from Southampton will leave a list of suitors; improvement is likely but also necessary, and needs to be quick.

Share freely! Take this to the forums! Forward to your mates! Cheers

Every week I write a Premier League blog, so if you like what you read here, check back.
If you are a Liverpool fan, then you might like the article I did on Raheem Sterling too: here

(nb. The early SoTR numbers include blocks, it's impossible to find a public source without, but for the purposes of this article, they are included)