'The Big Ripple' would like to announce the transfer of the weekly round-up column to the larger Statsbomb franchise.  We felt unable to turn down the offer made by franchise owner Ted Knutson and as such 'The Big Ripple' would like to extend thanks for your support since it's inception a little over 10 months ago and promises to return with further content as and when it thinks of things.

The column will remain as prior with the same blend of stats, mild humour and Tottenham sections (but not when they've just lost to Crystal Palace and Alan Bloody Pardew) and will hopefully be available from early on a Monday morning.

It is hoped that this transfer will be more akin to Alexis Sanchez than Fernando Torres.

Thanks again!
Posted by The Big Ripple at 18:22 No comments:

Halfway through the season seems a good time to compare this season & the teams competing within it to others.  Maliciously, the Premier League has already played the 20th round of fixtures, and played it so quickly that i'm behind, but still, it's worth a look at some historical trends & markers.  I've got the last 6 first half seasons I can compare & rank & this article is designed to look at some of the characteristics 2014-15 has & compare with the 5 seasons that preceded it. Data for previous years is under-available!  This gives us a sample of 120 & all rankings will be 'nth in a sample of 120'.

For the first time since 2011-12 we look to have a potentially enthralling 1v1 dual for the title.  Last season had Arsenal top at this point & Livepool's charge was late & long whereas 2012-13 was Man Utd's stroll.  2011-12 found Man Utd & Man City locked together at the top after 19 games with identical records, a scenario that would repeat right down to the last minute of stoppage time in the very last game & Aguero's late title winner.  The two sides ended up 19 points clear that year (both on 89 v 70 next best) & this year is shaping up similarly but with Chelsea replacing Utd in the mix.  Indeed, Chelsea's 46 point total after 19 games is only matched by Ferguson's legendary swansong & City's 43 points is only superceded by the aforementioned & the 2011-12 pair.   These are clearly two elite level teams & are superior to the rest of the league by a clear margin.  What fascinates me is how closely they resemble each other in the numbers & despite the media & casual observers happily coronating Chelsea since roughly late August, it leads me to believe that they are likely to push each other throughout. 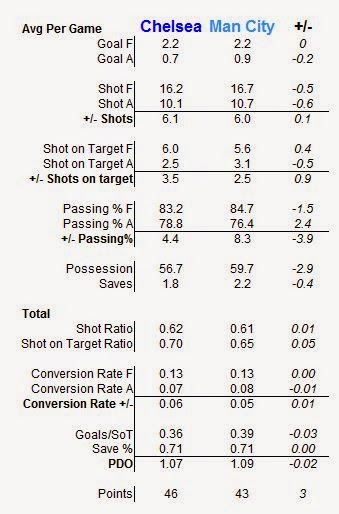 *Of course since I wrote this, Chelsea & Man City have managed to accrue identical records, which more than reasserts my point!

Shots For
There are no historically strong pure shots teams in the league this year, the best teams rank as follows:
We do have the two worst shots for teams in the sample though:
Swansea, Leicester, Sunderland & Burnley have all posted historically sub-par shots totals too.
In fact, there's has been a trend towards less shots over time with quite a big drop off this year.  There's a possibility methods of collecting could have changed but without knowing that we have a clear trend: 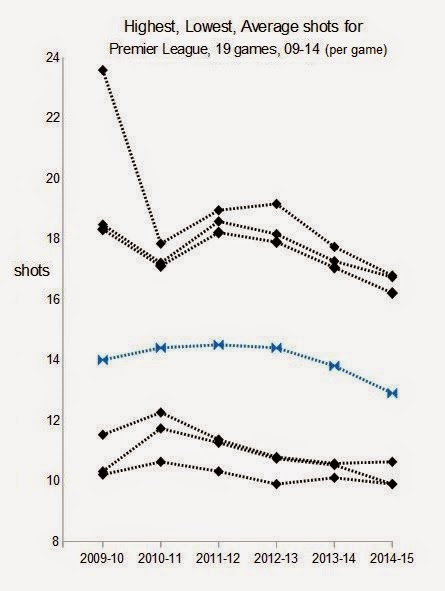 Shots Against
For there to be balance in the universe we need an equal opposite & conveniently we find similar but opposite trends in shots against.  There are no historically terrible shots against teams:
We do have the best shots against team in the sample though & two more scoring very well:
Here we see the trend again: 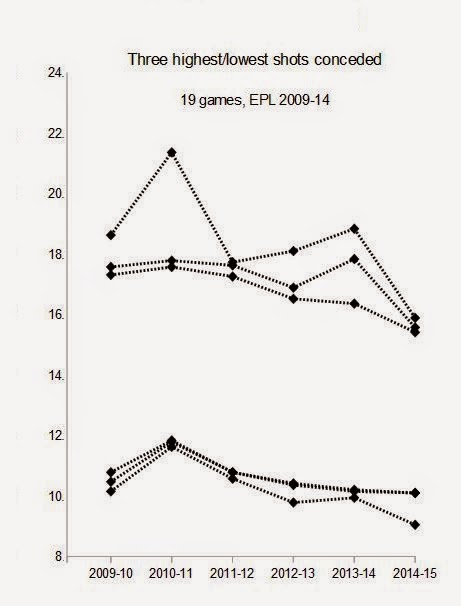 Quite naturally, these figures map themselves onto shots on target:

Shots on Target For
Best:
Worst:
Shots on Target Against
Best:
Worst:
No surprise that Chelsea and Man City show up very well in these categories & the 'bad' totals are posted by a wide mix of relegation possibles.  Again we see the natural trend that less shots-->less shots on target-->less saves.  Interestingly the goals totals have moved by a smaller degree than other components which hints at a possible increase in shooting efficiency over time: 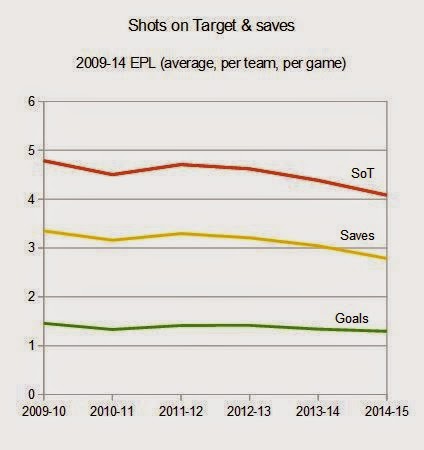 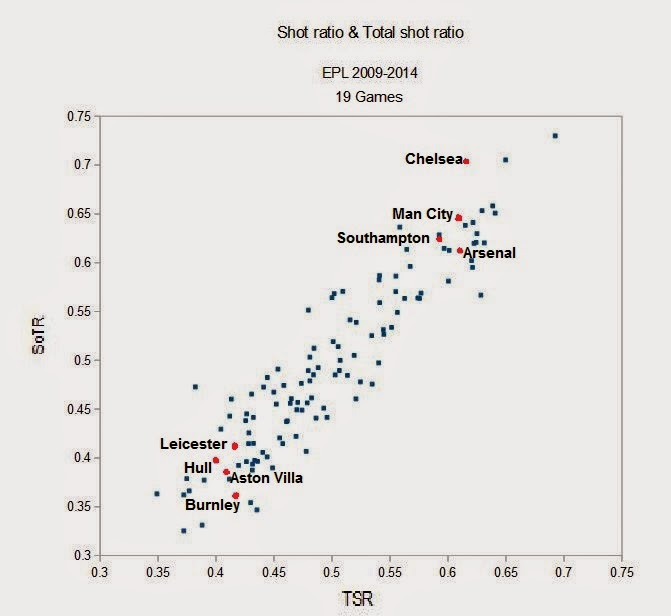 At the extremes, only Chelsea's shot on target ratio stands out as significantly high.  Arsenal, Man City and Southampton round out the best 4 clubs here & each has decent if not outstanding figures.  Similarly, the batch of worst teams are much of a muchness here, without being historically awful.

Everton's save percentage is the worst on record.  Roberto Martinez is also responsible for 4th, 7th, 18th & 30th positions whilst at Wigan.  Under par & worrying for Everton's current predicament.  Intriguingly, given the 'Pardew situation' Newcastle & Crystal Palace round out this season's top 3, in 6th & 9th overall.  Bad figures that may well improve but partially underline the problems Pardew both faces & has created himself.  In 2005-6 he guided West Ham for half a season to terrible totals then took over at Charlton & couldn't keep them up...

Man Utd, Aston Villa, Swansea & West Ham are running the highest save percentages, none of which is historically high but it will have helped some of their current success.  It's perfectly possible that these percentage could remain high throughout the season, but the list of teams that have recorded very high save percentages is littered with teams that generated a good year off the back of this & failed to follow it up once a degree of readjustment hit the following season.

Aston Villa & Burnley are running at about 6% conversion at the half way point (quickly redeemed by Burnley in week 20!) and rank 119th/120 and 116th/120 respectively.  This is very bad.  Even worse when factored against the relegation rate for seasonal 6% shooters: 3/3.  Limping to 7% or better would be a big help.

A clutch of teams are all running decent percentages:

League average is 10%.  Some of these teams are the true elite, some of them are experiencing good seasons driven to a degree by fortune & the other team is Everton.

There are 7 teams in that chart above & 6 of them are backing up their excellent but possibly short lived high conversion rates with a similarly excellent low conversion % against ranging from 7-9%.  Some of these are the true elite, some of them are teams experiencing good seasons driven to a degree by fortune & the seventh team is Everton.

Everton are the only one of these 7 to not have a conversion dominance & are conceding at a league high rate of 13%.  Put simply, at various times, the goals have flown in at both ends in Everton games.

There are no historical outliers on either the good or bad sides here but WBA, QPR & Burnley are all running high deficits here & Newcastle & Liverpool aren't too far behind them.  The story of conversion is a powerful one when understanding the relative successes of teams during a season.  It can vary wildly & quickly but mid-term trends can be extremely informative when stood against a wider context.

As an indicator of how vulnerable some statistics can be to one game, week 20 had a few notable entries, none more influential that the Tottenham v Chelsea game which hacked a good few chunks from Chelsea's excellent defensive numbers, in particular (average shots on target rose from 2.5 to 2.8) whilst giving a much needed boost to Tottenham's generally average figures.

Elsewhere, Villa's 0-0 has seen their conversion rate drop back down to c.5%.  With a pitiful 11 goals somehow powering a half decent points total, they face an arduous season.  In contrast, by scoring 3 at Newcastle, Burnley broached the magical 7% mark for the first time since the first game.  If they can stay above it, they've got a chance.  Meanwhile, Palace look like they need a Pulis but are gonna get a Pardew & WBA have hired the right guy; never pretty but highly effective, his teams have always managed to build from a defensive base & outperformed woeful attacking figures.  West Brom's opponents are unlikely to be scoring at 12% for long.  Palace's conversion went from 6%F/11%A to 8%F/9%A under him last year & his Stoke teams never once conceded at above league average rates or ran a conversion deficit of any significance.

FA Cup this week & the normal blog will reappear as per usual after the next round of league matches.
Thanks for reading & if you liked it feel free to share!

Meanwhile: if you missed them:

& the article that killed of Pardew (maybe)