The issue of how anyone could have predicted Chelsea's decline has been a prominent thought recently.  I recall about March time having a eureka moment with regard last year's Chelsea team when I realised that much like Man Utd 12-13 or Liverpool and Arsenal 13-14, on balance, "things were going their way" and by that I mean they were collecting points at a rate above and beyond an expectation derived from versions of their shooting stats.

Following on from James Grayson's work in building a team rating- so beyond simple shot numbers- I tracked similar myself and found that for 2014-15 two teams overachieved at a far higher rate than anyone else: Chelsea and Swansea.  You would find similar using xG.

So Chelsea's true talent level was a good deal less than the 87 points they put together.  Their season existed in two clear halves; in the first 19 games they recorded solid top 2/3 numbers yet picked up more points than any other team in the last 6 seasons (46) and in the second half they picked up 41 points whilst putting up second tier numbers.  In the first half, their defense was exceptional at preventing chances and also goals.  In the second half, their defense was less effective in itself but their save percentage rode high.

I mention this because there is a reasonably wide assumption that despite this season's malaise, Chelsea will improve.  And a bit of debate has centred around whether they well be able to qualify for the top four or failing that, show top four level form for the rest of the season.

I would contend that throughout early to mid 2015, Chelsea's underlying form has pegged them as a 5th to 8th team, therefore, if they are to revert to the form which might be expected of them based on last season's most recent 19 game form, it's reasonable to assume that their true level is just that: a fifth to eighth level team.  Shot ratios around 55-58% will most times find a team exactly there: in the Europa mix.  That kind of level can expect a broad return of 40-50 points from here on in, which would lead to a full return of 51-61 points.

Well, Omar Chaudhuri's been tracking Sporting Index' points predictions from the start of the year and they now have Chelsea at 63 points, down from a starting point of 83: 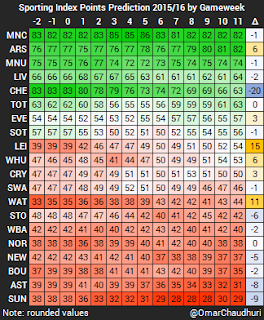 So the bookies, who let's remember are professionally and financially deigned to be more right than I am about these things, feel that Chelsea can recover, to a degree but not to an extent that 4th place is viable. A projection of 52 points in 27 games is ~4th place form but achieving 4th place on top of 11 points in 11 games is likely beyond reach.

What this also shows us is how reluctant even the bookmakers were to downgrade Chelsea's 14-15 season.  Projecting them on 83 points- the same as City to start- wasn't unrealistic.  While I felt City were strongest set for this year, in my preview, I was certain that Chelsea would be tough to surpass, indeed I suggested that any team that scored more points than them would win the title.

In the range of media pre-season predictions I saw, there were a few crackpot suggestions that Man City would struggle, but I don't recall anyone picking Chelsea to fail and you would have been certified if you had predicted them to be picking up points at relegation pace into November.

So while there was a case to be made that by now Chelsea could have been predicted to be pulling in points at under two per game and thus sitting 4th to 6th, nobody could have predicted that they would have cracked to this degree.  At best I can project that they could be on 14 points by now, only a win ahead of their real total.  This is how bad they have been.  On the pitch, this isn't a case of "luck" or unaccountable variables intervening.

The other thing that could not be predicted was the complete porousness of their defense.  While seemingly tiring as 2014-15 wore on, the tactical shift in the team was built on a sturdy defense, when I tried to analyse their back four, each of them appeared to be producing numbers akin to centre backs; Mourinho's block was in full effect.  So if you were theorising that Chelsea were unlikely to perform at a high level this year- something very few did- it was entirely logical to presume that any suffering would be on the front end, to follow on from the narrow victories and uninspiring shot numbers of late season. And Mourinho has simply never had charge of a defensively suspect team.

To predict that this team would suddenly be conceding two goals a game and only Sunderland would be conceding more shots on target? Nah, that's just crazy talk...

So then you start to wonder about their transfers. Why is De Bruyne ripping up the league at a different team? Why are the first change strikers Falcao and Remy and not Lukaku? What happened to Cuadrado and Salah?  Beyond Matic, Fabregas and Costa, Chelsea's transfers are far more erratic than we have become used to.

And did this overachievement last season mask true decline and the end of a team? If Terry is in decline and none of his partners are up to his standard, whilst Ivanovic is regularly flayed out on his flank, Fabregas has high miles, Hazard has played relentlessly for a number of years...

No new blood and then the chaos of potential distrust following on from the Carneiro incident.

It's multi-faceted.  And without access to the day to day operations of the first team, it's impossible to do more than speculate as to what the human factors are. And those factors must be real, for Chelsea to have fallen so far outside predictable parameters, further inputs beyond those that can be modelled effectively must have had an impact.

I tweeted earlier that it reminded me of post Ferguson Man Utd, but in that case Ferguson was long gone and the problems he left were somebody else's issue.  Here at Chelsea, and maybe beyond the cost of his dismissal, this is why Mourinho remains: there is a big task at hand.  A lot needs to be achieved- the squad suddenly looks in dire need of new blood and it will take more than one window to solve this.

After I posted this @tommillard replied and pointed out the BBC predictions table. No slight on their skills but only one picked Chelsea outside the top 2: 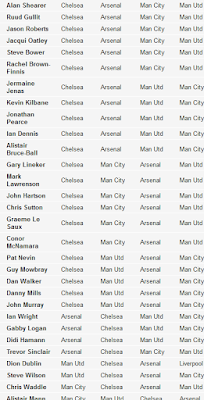 And Tom also pointed out the one guy who was down on Chelsea pre-season, Mike Holden

Have a look at his preview here