It has long been held in statistical circles that Man Utd's title winning effort of 2012-13 was Alex Ferguson's crowning achievement. A cursory look at the shooting statistics suggested that this team was merely average in comparison to the many fine teams he'd managed to titles before. Yet somehow they scored a ton of goals, had it sewn up in April & finally finished ahead by 11 points. I would contend that a blend of two factors caused this stat-defying dominance, one is clear and provable: the inadequacy of others, and one remains shrouded in mystery: the Ferguson special sauce.

In a season in which they lost 5 games overall and only failed to win 10, they went top of the league on 24th November, a lead they would never relinquish & at this point had a record of 10-0-3. Between that point and finally securing the title exactly 5 months later on 24th April, their record was an astounding 17-3-1. They ended the season with 28 wins which is a total that nearly guarantees the title. I say nearly as there is one notable exception: Man Utd 2011-12 and we'll get to that later.

One of the core complaints regarding 'how' Man Utd win the 2012-13 title was their comparatively average shot totals and ratios but this wasn't a trend purely in that season, Ferguson's later Utd squads often failed to impress here:

Good but not great totals: but clearly, this did not preclude competitiveness as their finishing positions indicate. Indeed, a shot on target ratio higher than pure shot ratio is quite a Ferguson hallmark & suggests possibly a team that takes smart shots.

Interestingly, we can see that whilst there was a drop off in pure shot dominance in over the preceding years & in 2012-13 it did not convert into a substantial drop in shots on target:

The left graph shows a clear compression in the difference between shot totals whilst the right graph shows how this had very little impact on shots on target. So it appears that Man Utd were taking less but smarter shots. Where they had a clear and consistent advantage in shots on target, they also had extremely high rates of shot conversion dominance: they were converting shots at a high rate & their opposition was not. This is how those two factors look when shown against the rest of the league in 2009-14 & against other league winners: 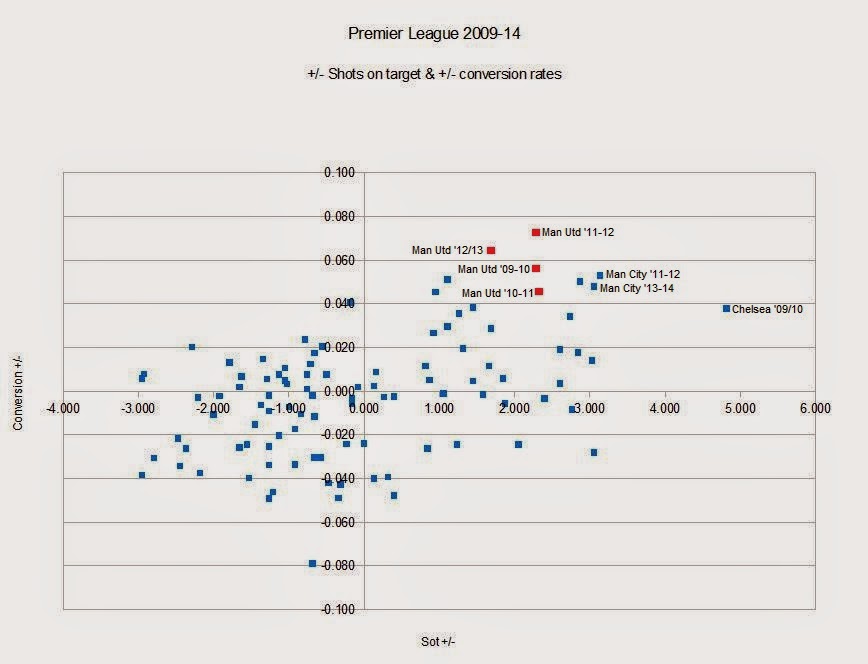 Ferguson's teams consistently occupy the same part of the chart, and do so in relative isolation. The other league winners are labelled & we can see they generally appear to have high totals for both measures.

Fundamentally, what I've tried to show here is that what Man Utd did in 2012-13 did not exist in a bubble, and they managed to achieve a similar output to other seasons. This is superficially obvious given their goal totals & wins but 2012-13 was the only season in which they destroyed the league & won with clear ease, so how did that occur?

In order to understand 2012-13, I feel it's necessary to look at 2011-12, the famous season in which Man Utd were pipped deep into the last moments of stoppage time of the whole season by Man City & Aguero-o-o-o-o. In this year, Man Utd were very good but their path to the title was blocked by the fact that Man City were 0.0001% better One key component of this was the high conversion rates both teams enjoyed combined with the low conversion rates achieved by their opposition:

As we can see, throughout the season, both teams maintained a significant dominance in this metric. We can see from other club seasons how helpful this can be when challenging for the title; each of the last 5 title winners has benefited from a significant conversion advantage (and indeed, with older data, I can see that it is almost a requisite). These are the crazy high conversion rates and dominances that powered that memorable duel. Only one team could replicate that the following year. 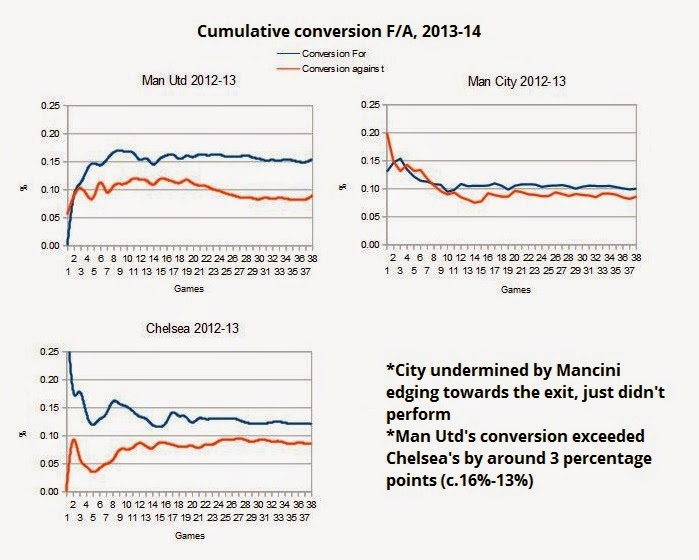 Man Utd's raw conversion here was about 15%, Chelsea's was 12% and City's around 10%. Usually, more than one championship contending team records a high conversion rate, as we saw in 2011-12. Liverpool & Man City both were charged by this last season & it holds nearly every season. Man Utd's 3 percentage point advantage in 2012-13 is without precedent here and when factored against actual goals creates significant dominance, despite their reduced overall shot totals.
Projected goals at different conversion rates

So, smart shooting & Ferguson-brand conversion was worth 30 goals against league average, 20 goals against the effort City were putting in and 11 against Chelsea. But what of league average? In 14 years I have numbers for, Utd only dipped under 10% once in '04-05 and that was the only year they had a conversion dominance of under 4 percentage points. And that's part of this issue here: whatever Ferguson had his team doing be it smart shooting, using world class finishers or stopping the opposition, he had his team doing it each and every year, not just 2012-13. And in that year, nobody else had their soldiers lined up correctly, he signed the most prolific striker in the league who stayed fit for them & had a great year & they won it unopposed.

It's possible to criticise the goals they conceded, 43, but even that total is fluffed by 8 conceded after the title had been won, including the daft 5-5 game against West Brom.

The 2012-13 season will be remembered chiefly in terms of Ferguson's skill. What came after under Moyes was somewhat inevitable although it's possible he inadvertently magnified the comedown. However, it's important to remember that over-achievement in relation to underlying statistics is commonplace, it's just this example resulted in a title. I suspect Liverpool's run in 2013-14 would be equally revered if it had ended up with a title, their relentless attack & conversion dominance had different but similarly extreme facets. Even lower down the league there are good examples, the West Ham side of the same year ran numbers like a relegation cert yet ended up 13th.  Factor in that a football season of 38 games is forever a small sample...

Equally the near identical form of the 2011-12 season appears forgotten in comparison, maybe because City achieved similar. By nature an outlier lives alone, in a pair it seems less uncommon.

To my mind, the truth about Ferguson's methods remains mysterious and there's probably a bundle of informative truth dotted around the autobiographies of his many former players. But he really nailed it those last two years and it's interesting that they coincided with what may have been Rooney's peak aged 25-27. So often underrated by overstated expectation he was top scorer in the first year & had a different role with Van Persie in the team the second.

I think i've shown that his last achievement can be viewed in the context of his other work & that the inefficiency of others contributed strongly to that final win. In the final analysis it was just another title to go with the other twelve but here was a man who's methods often won out & his motivational abilities, to steady his team from that 2011-12 defeat and go again, were likely peerless.

I've had this article in mental limbo for ages & part written it before so thanks to Dan Altman and his article on the same subject for getting the ball rolling, to Max Odenheimer for picking up the ball on Statsbomb and forcing my hand :) and to the usual suspects for poking me a bit into writing it.  Hopefully you enjoyed it, and if you did, share freely!
Check back Monday morning for the weekly blog and then again for other musings.

( *nb.  I compiled/defined a rudimentary shot efficiency ranking in the course of writing this article & the top ten looked like this: 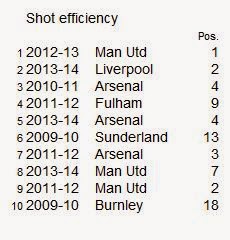